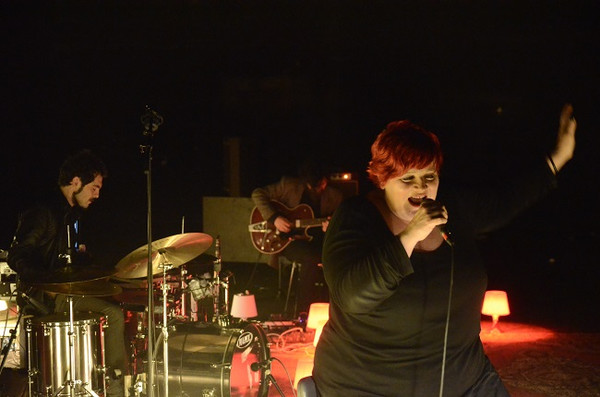 NICONOTE is a world, a universe between music and performance. An Italian / Austrian Siren not definable, she’s a performer, an outsider artist of the independent scene developing a personal language.

In 1997 she created the acronym NICONOTE to define her productions.

NicoNote aka Nicoletta Magalotti born in Rimini in 1962, she approaches to the theater with masters such as Yoshi Oida, Gabriella Bartolomei and Woytek Krukowsky.  In the mid-80s, she was the singer of a seminal new wave band Violet Eves playing in Italy, France, Swiss, Austria and Greece ( La Cigale, Printemps de Bourges, Transmusicales, U4, Biennale Mediterraneum).  An interesting discography crosses through her artistic career until today. NicoNote is also a DJ and  inventor of unconventional spaces and has created with DJ David Love Calò a special season of italian clubbing in the 90s.

She acted in various plays directed by Romeo Castellucci of Socìetas Raffaello Sanzio with whom she plays in many international tournees, after directed also by Patricia Allio, Maurizio Fiume, Francesco Micheli  and Fabrizio Arcuri.

In 1997, she created the acronym NicoNote her stage name and of her team, which in 2010 became NicoNote Dream Action, a working group leading projects mostly between France and Italy, supported by La Fonderie - Le Mans where she presented in January 2011 her latest creation: Drinnen - performance suite through Schumann.

It’s out now the new album produced by NicoNote for Cinedelic records. The title track of the album’s Alphabe Dream, composed with the French musician Mikael Plunian.

Her new concert is under construction EMOTIONAL CABARET updates in january 2014.