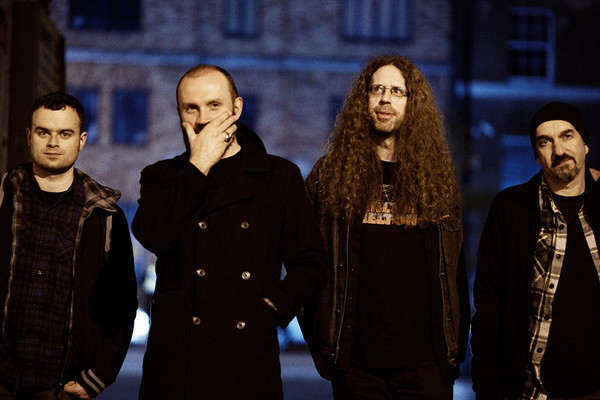 Mugstar are the best psychedelic instrumentalists in the world right now (with the possible exception of Earthless, who plough a more free form Hendrix-inspired furrow than Mugstar's very English/German psych-beat). Their punky chunky riffs and motorised beats draw deep on the balls-out cosmic crunch of the first five Hawkwind albums and the eternal autobahn mantra of the three Neu! albums (plus the hallowed sacred genius song-concept that was/is Pink Floyd's 'Set The Controls For The Heart Of The Sun'), but to reduce Mugstar to such a focussed and specific historical output would be inaccurate. They have evolved since the early twenty noughties into a full throttle psych-machine that takes a well-loved template and hammers it with craft and guile into a new mode of inner transport, one that is so refined and beautifully executed in its simplicity that the music NEVER needs vocals, it just NEEDS to be heard live (preferably live, and if not live then loud on a quality stereo). A testament to their charging crackling power was the fact that amongst the modest and committed crowd a number of punters had started to properly dance, flinging their arms around and really bloody going for it like it was the 1972 Buxton Rock Festival . How could you not move to this? I myself was playing a kind of air drums set up, my right thigh being the high hat or ride cymbal, my left thigh the snare and my right foot naturally keeping time by snapping my heel on to the floor in syncopation to the bass drum. Whilst doing this I stared straight at the masterful Steve Ashton, battering out the most precise beats upon his kit with such loose-wristed ease it was like he had been drumming for a thousand years. Kicking off with a head-kicking 'Sunburnt Impedence Machine' from 2010's 'Lime', Mugstar steamrollered through their expansive back catalogue, including a circuit-frazzling adrenalin-burning 'Today Is The Wrong Shape' from the recently re-released on vinyl '...Sun, Broken...' album. As tight as an amoeba's anus, Mugstar work like a holistic unit of sonic attack, each member no more than the entirety of the band's sharply defined and uber-driven sound. Having said that, Pete Smyth goes for the frontman role as he wildly oscillates and naturally draws the eye with his frenetic onstage activity, as he swaps screaming lead guitar for keyboards and then for melodica, whilst jerking around and twitching like a severed horse's cock. Underpinning all of this are Jason Stoll's titanic and ever undulating bass lines, perfectly recreating the massive cement and steel foundations that Lemmy so admirably provided on the early Hawkwind recordings. If you haven't already acquired their six studio albums (get them all from Mugstar's bandcamp page) then do so with urgency. I find that I never take a Mugstar album off before its finished like I sometimes do with other bands, because their full blooded grooves never fail to draw me right in to their very centre. Indeed any time of the day seems to be Mugstar time. That sounded like a tag line for an advert didn't it? Imagine a TV advert for Mugstar? Anyway, it was here in this very venue a couple of years ago that I first saw them, supporting Harvey Milk (where I memorably wrote "Mugstar wove a many layered Persian carpet of hypno-rock that showed off their pedigree as possibly one of Britain's finest exponents of psychedelia, for want of a better genre term. Shall we just say music that is designed to appeal to 'the inner voyager'?"), and then again last year at the second Liverpool Psychedelic Festival (where they completely wooed every midnight fuck-head in the hall). Both nights they pulverised the audience with mighty combination punches of out-there riffs, wildly off-kilter keyboard breaks and savage, ever insistent drumming. Where other instrumental combos often lapse into quiet noodlings and meanderings, Mugstar never ever let up the pace. Theirs is a breathless and joyful journey, where the drums and the riffs interlock in dynamic union to push forwards and ever onwards, an essentially punk aesthetic that says 'don't fuck about, don't bore the listener, take the fucker by the throat and speed on down the road'. We got one encore and then it was eleven pm and we all had to leave, satiated and filled-up on a creamy cosmic casserole of raw power. Sonic tonic.