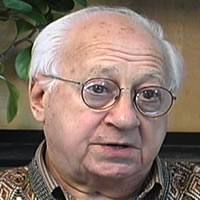 Dokumentarfilm-Weltpremiere „Think only of today“ mit und über Max R. Garcia (Überlebender Auschwitz, Mauthausen, Melk und Ebensee) SYNOPSIS! This documentary traces the life of Max Garcia from his childhood in Amsterdam through his ordeal surviving the Holocaust, and to his eventual life in the United States where he became an architect, married, and had children and grandchildren. The film also tells the story of Bob Persinger, the tank commander who liberated the Ebensee concentration camp, and it describes the dramatic encounter between Max and Bob at the gates of Ebensee.! ! This documentary is unique in that it also explores the effects of the Holocaust on succeeding generations. Through interviews with Max’s children and grandchildren we gain insight into the different ways each person from each generation feels the burden of such a searing experience.! !